What do we know about local non-hormonal treatments for vulvovaginal atrophy?

Both hyaluronic acid and glycerine are safe options and they lack of side effects. Nevertheless, hyaluronic acid has more clinical studies and scientific basis than glycerine for its use on vaginal moisturizer in women with vulvovaginal atrophy. 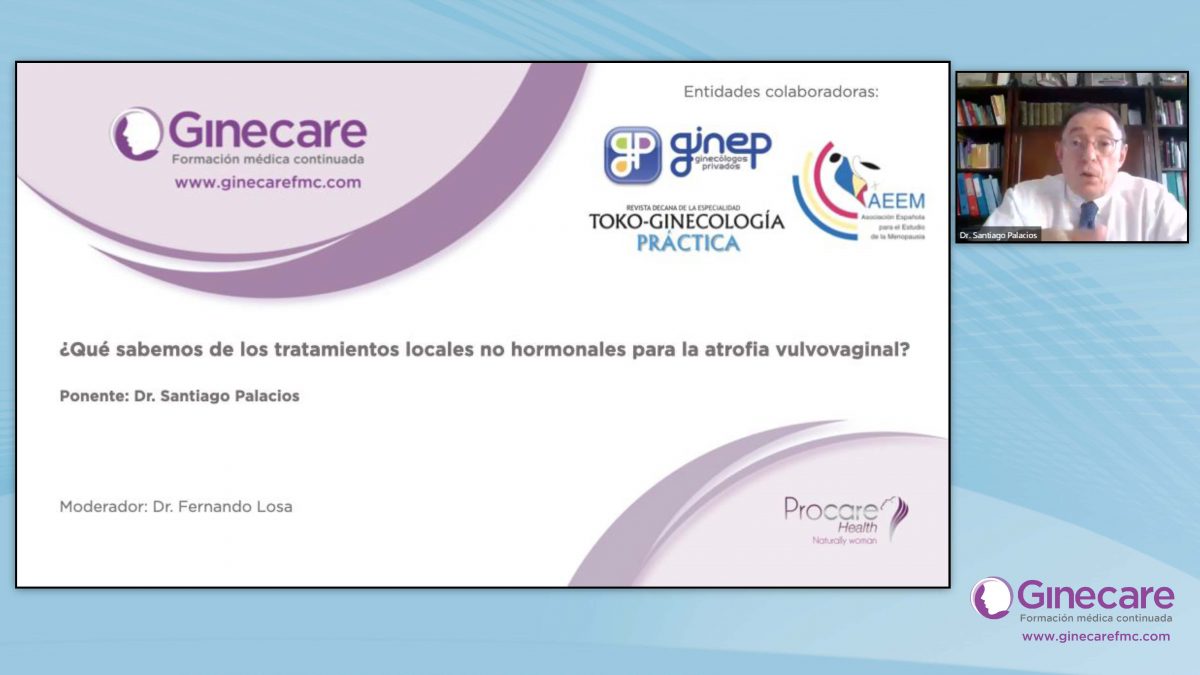 ¿How is the most suitable moisturizer gel for the relief of all the symptoms linked to vaginal dryness? Doctor Santiago Palacios, gynecologist and researcher, try to answer this question on the last Tuesday, 2nd of June, in the webinar “¿What do we know of local non-hormonal treatment for vulvovaginal atrophy?” organized by Procare Health, a laboratory specialized in women’s health on the continuing medical training platform called Ginecare.

Vulvovaginal atrophy affects life’s quality of 40% of women which are at the peri and post menopause in Spain, being vaginal dryness one of the symptoms which annoy more. Around 15% of women before menopause suffer from vaginal dryness, and up to 50-60% suffer it in the stage of post menopause. In addition, it exists a clear association between vaginal dryness and painful sexual relationships. Nowadays, women health’s professionals demand better solutions for commercial moisturizers. For example, they could have a higher concentration of hyaluronic acid, they could last longer and also they could have different unique selling point, such as ingredients which influence positively in its quality and efficacy, explained Palacios.

Nowadays, glycerine and hyaluronic acid are the moisturizers most used in Spain. Glycerine is a viscous liquid with a high boiling point, colorless, insipid, odorless, hygroscopic and water-soluble used widely in the pharmaceutical and cosmetic industry. Hyaluronic acid is a natural component from the extracellular matrix, articular liquid, skin, and vaginal mucous membrane. It has a simple structure but a high molecular weight, hygroscopic properties and viscoelastic, used in medicine, cosmetics and food.

The lack of data and randomized studies of non-hormonal products for vulvovaginal atrophy is evident. However, the balance tilts in favor of vaginal hyaluronic acid in comparison with glycerine. “Hyaluronic acid has more clinical studies and better scientific basis for its use as a vaginal moisturizer in women with vulvovaginal atrophy than glycerine”, pointed Palacios during the webinar. He also remembered that either hyaluronic acid or glycerine are safe therapeutics options and lack of side effects.

Dr. Palacios assured that 2% hyaluronic acid allows the osmolality’s stability of the formulation and also enters inside the range recommended by the “World Health Organization (WHO)”, which advise vaginal moisturizer not to surpass 380 mOsm/kg and minimize the risk of epithelial damage.

Use of niosomal technology in the formulation

In addition to the quality and concentration of hyaluronic acid, the formulations (transport vehicles) are important and make the difference between products. In some formulations, hyaluronic is encapsulated in liposomes or niosomes.

Liposomes are microspheres coated with a lipid layer which stores water inside, for then being released slowly. The most widely used are polycarbophilic gels, which attach to epithelial cells of the wall and mantain 60 times the epithelial water retention. Niosomes are vesicles with a high capacity of deformation. Thanks to its elasticity, they can penetrate to deeper layers of the skin and mucous membrane. They are used for improving the bioavailability of the principal actives or pharmaceutical compounds.

The advantages of using niosomal technology for encapsulating hyaluronic acid in vaginal gels instead of liposomes are several, as Dr. Palacios argued, since niosomes possess a higher stability, purity and they do not need special conditions for its storage. Niosomal technology protects hyaluronic acid from foreign factors. In addition, inhibitors for hyaluronidase can be included, such as kaempferol which prevents the degradation of hyaluronic acid.

Addition of other ingredients, such as prebiotics

The addition of prebiotics on vaginal moisturizer favor the bioselective growth of lactobacillus, inhibit pathogens agents and biostimulate epithelial microbiota. Dr. Palacios encouraged all health’s professionals to inform and train themselves in the existing products in order to know when one product is better than other in different occasions. “It is important to know what you are giving and decide why you recommend a specific product”, concluded Dr. Palacios.

Idracare, from Procare Health Laboratory, is a vaginal gel used for moisturizing and relieve all the symptoms associated to vaginal dryness, made from natural and non-hormonal compounds with niosomes of high concentration in hyaluronic acid and kaempferol. This flavonoid takes the name from his source of extraction, an aromatic ginger (Kaempferia galangal). Kaempferol can also be found in the tea plant, broccoli, apple and grapefruit. It is a natural antioxidant and inhibitor of hyaluronidase. In addition, Idracare has BioEcolia®, a prebiotic which balance vaginal microbiota. BioEcolia® is an oligosaccharide obtained from natural sugars which stimulates the growth of beneficial bacteria instead of pathogens.

98% of health’s professionals would recommend usually or always Idracare for daily clinical practice, according to the IDRAVAG survey, realized by Dr.Palacios and Dr.José Fernando Losa who is a gynecologist, obstetrician and maternologist and also participated in the webinar as a moderator.

This webinar has been the second of a cycle addressed to gynecologist that will take place at Ginecare FMC. It is a platform designated to harbor continuing medical training for doctors, nurses, midwives and pharmaceuticals, just like Carine Emsellem said, director of scientific and medical department from Procare Health during the webinar.